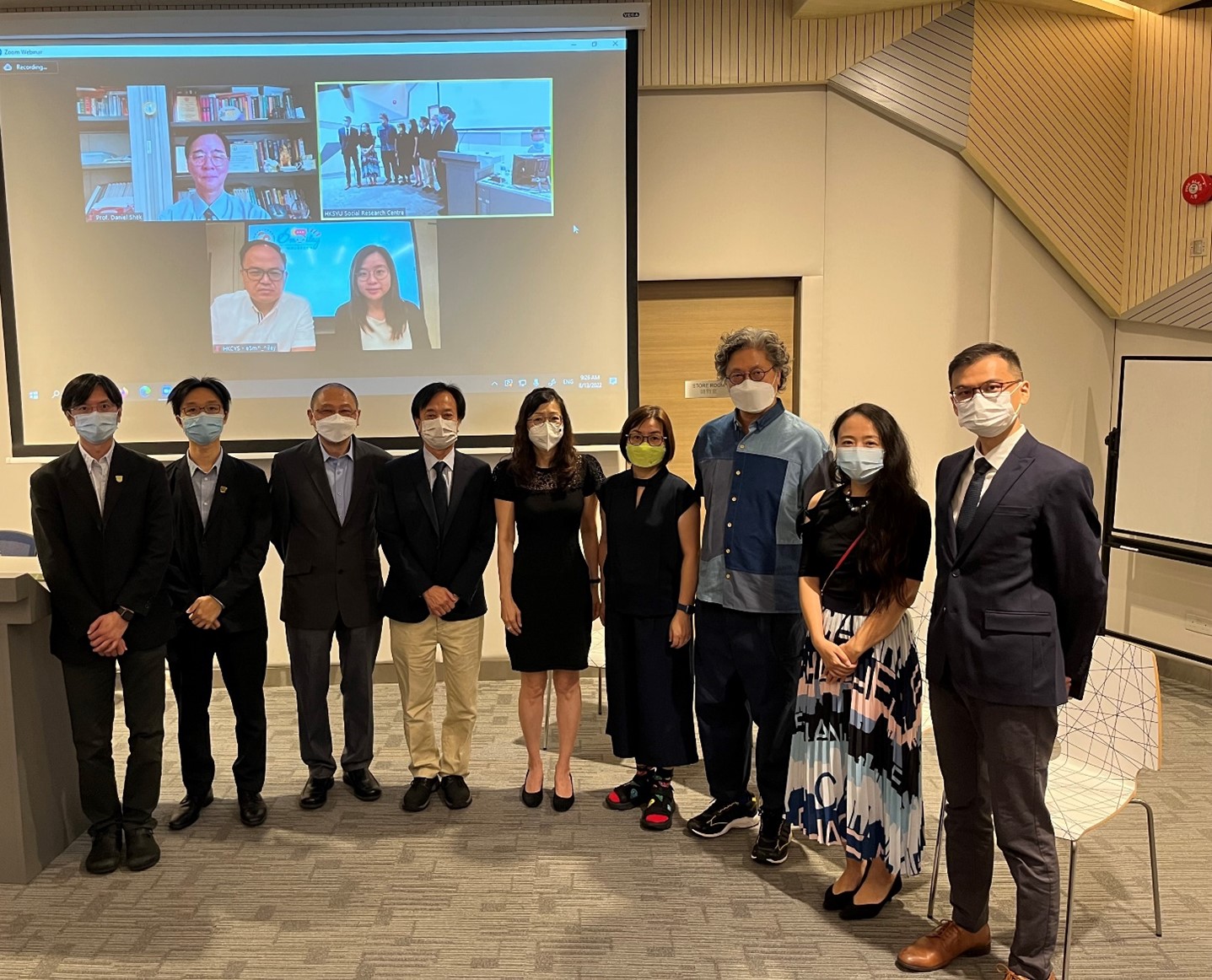 The seminar, delivered in a mixed-mode format, started with the presentation of preliminary findings of a RGC IDS (CRG) funded project entitled “Youth Identity Status and its Psychosocial Correlates: A Longitudinal Study in Hong Kong” by a multidisciplinary research team in Hong Kong Shue Yan University. Prof. Daniel T. L. Shek, Chair Professor of Applied Social Sciences, was invited to be the keynote speaker who responded to the presentation of the research team. At the same time, representatives of two agencies, namely, Tung Wah Group of Hospitals (Youth and Family Services) and Hong Kong Children & Youth Services (eSm^_^iley), were also guest speakers who shared their experiences in their work in youth services. The event was well-received and attended by over 50 in-person and online participants, including NGO workers, secondary and post-secondary teachers, and professionals.

The Research Team at Hong Kong Shue Yan University has conducted a study of Youth Identity Status (YIS) using the Dimensions of Identity Development Scale (DIDS) developed by Luyckx et al. (2008). This was the first time the scale was adopted for use in Hong Kong. Entitled “Youth Identity Status and its Psychosocial Correlates: A Longitudinal Study in Hong Kong”, the study carried out four waves of data collection, spaced out at three 6-month intervals. Its sample consisted of secondary and post-secondary students with ages ranging from 15 to 24. The results presented in this seminar were based on wave 1 data (collected from November 2020 to September 2021). In this wave, a sample of 1,840 students responded to the questionnaire, including 958 secondary students and 882 post-secondar y students. According to the pattern of identity statuses generated by Luyckx et al. (2008), six identity clusters were identified through confirmatory factor analysis and cluster analysis. The proportion and meaning of each cluster were shown in the chart and table below: 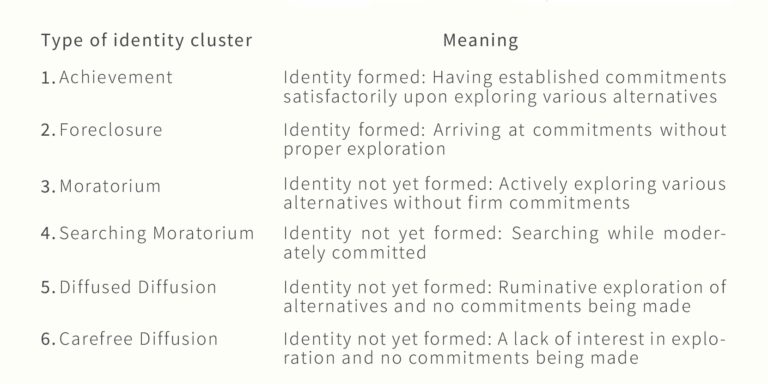 Professor Selina Chan, Academic VicePresident of Hong Kong Shue Yan University, delivered her opening speech for the online seminar.
As commented by Prof. Cheung Yuet Wah, Project Coordinator of the project nd Head of Department of Sociology, the above-mentioned research will not only have academic contribution of being the first research team to adopt Luyckx’s scale for the identification of various identity statuses in the context of Hong Kong, but also will serve as important references for the improvement of youth policy and the design of youth programmes and services that can help young people to construct and maintain a stable and positive identity. More specifically, youth strategies should help young people to advance towards an “Achievement” type of identity status, and avoid falling into the “Diffusion” statuses. When all the four waves of data are available next year, the trajectories of the different youth identity statuses and their reciprocal relationships with psychosocial variables across time will be analyzed, thereby providing more findings for the research team, agencies, schools, and policy makers to work together for effective youth development programmes.Based on the research findings of the research team, Prof. Daniel Shek gave a positive response to the research team’s presentation, and commented on youth policy issues in the online seminar. He believes that the current youth development policy is not comprehensive enough so that most of the teachers and parents had over-emphasized the academic results while neglecting the physical and mental health of the students. Especially under the COVID-19 epidemic situation, he noticed that only public health policy and financial issues were brought to attention in the society, while the lack of interpersonal care and family capital faced by the youngsters were being ignored. At the same time, he pointed out that Positive Youth Development could provide a more comprehensive theoretical framework for exploring more relevant issues, thereby helping young people to grow steadily, and achieving the goal of wholeperson development. 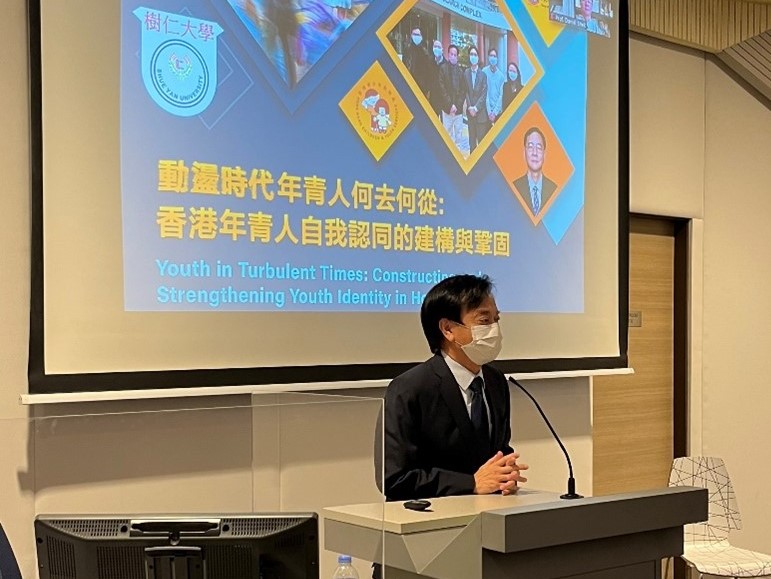 Next, representatives of TWGHs (Youth and Family Services) and HKCYS (eSm^_^iley) presented their frontline experiences with youth clients of their services. TWGHs (Youth and Family Services) summarized four major challenges faced by the youths under COVID-19. Firstly, their daily life has been disrupted. A reduction in their outdoor activities has caused them to play more mobile games at home, resulting in an increase in their obesity rate and thus posing harms to their physical health. Moreover, a switch from face-to-face to online learning has weakened their social skills and made them feel a lot less social support than before. Staying at home for a long period of time has restricted their physical and spiritual space, increasing their conflicts with family members. Lastly, the pro-longed pandemic has posed a huge uncertainty to them, losing confidence and even hope for their future. To address these issues, the Youth and Family Services of TWGHs has introduced a series of activities, such as workshops, interest classes, and game teams, for them to enhance their self-identity and raise their well-being.

The presentation by representatives of HKCYS (eSm^_^iley) focused on the differences between youths’ self-identities when they are online and when they are offline. According to their experience, they found that the youths are more willing to open their window and show their true self online because of anonymity, while they will not be willing to do so when offline. To cope with these issues, HKCYS (eSm^_^iley) will actively approach different types of youths through various platforms on the Internet, including e-sports, music, and online programmes, so as to help them to gradually modify their expectations and reduce the possibility of their self-discrepancy, thus enabling them to maintain a diversity of self.

After the presentations, the research team and the guest speakers joined a roundtable discussion section to further exchange their views on youth identity status and its service implications. The topic mainly revolved around the possible means for youths to build up a clear understanding and acceptance of themselves, and not to always make comparisons with others. As many of the youths in Hong Kong have not formed a positive and committed identity status, it is suggested that researchers, agencies, schools, and policymakers should join hands to develop comprehensive and effective youth development strategies to strengthen their identity status. 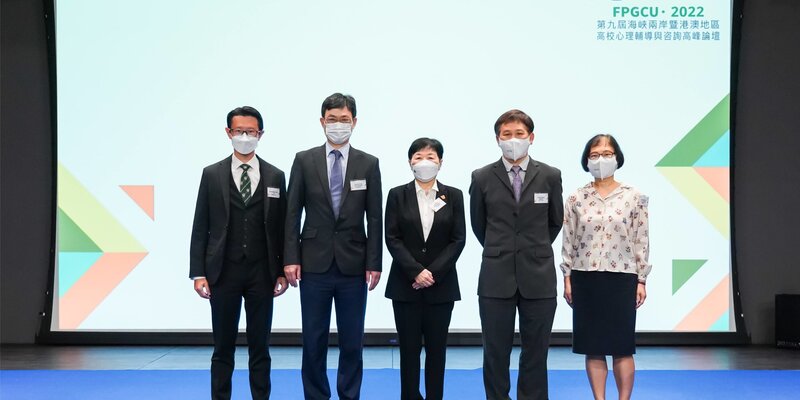 The University held the "Summit Forum on Psychological Counselling” in higher institutions across the four regions, inviting more than 300 contemporary counselling professionals from the Mainland, Hong Kong, Macau and Taiwan to conduct online and offline simultaneous sessions for academic exchanges and sharing practical experience. 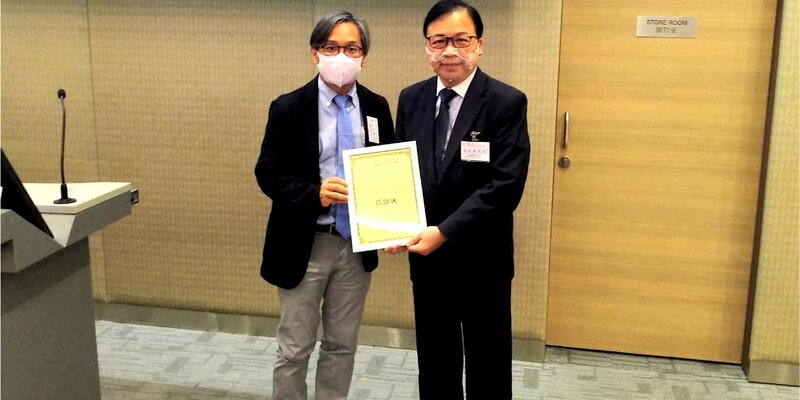 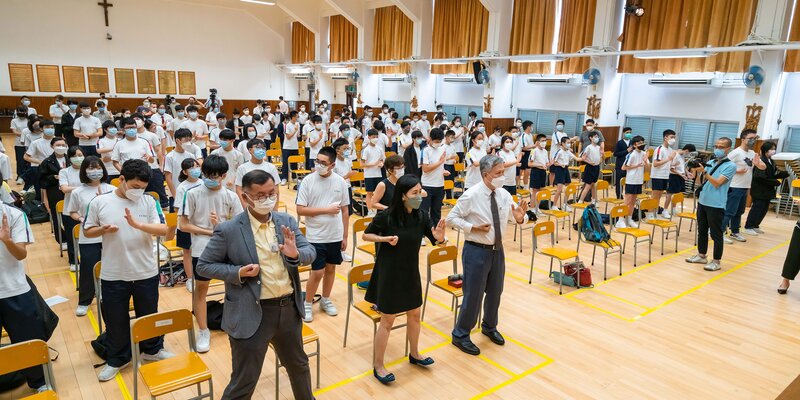 The Department of Journalism and Communication Obtains More than HK$1.5 million Funding to Promote Knowledge Transfer

Two research projects “Ving Tsun – Martial Arts in Artificial Intelligence” and “Hong Kong Intangible Cultural Heritage and IPMAN Ving Tsun”, both led by Dr. Lee Ka Man, Head of the Department of Journalism and Communication, were separately granted funding of HK$1.18 million from the Innovation and Technology Fund and HK$0.4 million from the Tin Ka Ping Foundation. The two projects have been conducted activities in July 2022, through the use of digital media and artificial intelligence technology, and the use of picture books to analyze the relationship between intangible cultural heritage and Chinese culture for primary and secondary school students progressively, thus promoting knowledge transfer.